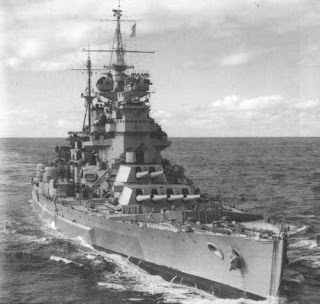 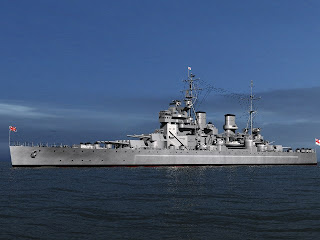 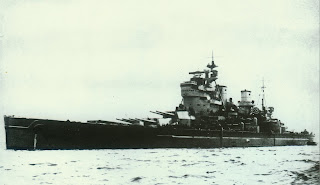 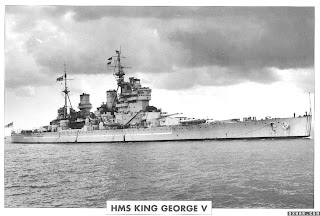 The hms King George V absolute maximum gun range in 40 degree elevation, is 36,850 yards,In terms of shell weight,KGV used 1,590 pound shells. The KGV's 14-inch guns had quite a few problems initialy in service, namely they could very easily jam in combat. The biggest examples were the HMS Prince of Wales at The Battle of Denmark Straight, and HMS King George V at The last battle of the Bismarck. To be perfectly fair, PoW was a brand new ship that hadn't had all of its kinks ironed out. KGV's problem is attributed more toward fatigue than anything. The gun in terms of operation was based off of the Mark I 15inch/42caliber gun used by the Queen Elizabeth-class, the Revenge-class battleships, the Renown-class Battlecruisers, HMS Hood, etc, in that a heavier shell would be fired from a lower velocity gun. This descion was made, in part due to the fact that the Nelson-class battleship's guns basically fired lighter shells at a higher velocity. The barrel life and reliability of the 16-inch gun used on the Nelson-class was lower than the older 15-inch guns mounted on the aformented warships.
Secondary guns:The King George V mounted a total of sixteen 5.25 dual-purpose guns,The 5.25 DP was a effective weapon, particularly with proximity fuses.
King Geoge V's armoured belt was 15.4 inches thick.the turret armouring at thickest was 12.75 inches thick

Top Speed: King George V's projected top speed was originally 30 knots, but generally accepted top speed is 28 to 29 knots
Fuel range: King Geroge V's maximum nautical range was 5,400 miles. The rational behind the relatively short range of the King George V-class was that it could re-fuel at British bases all around the world. This proved to be more of a liability than an advantage in pratice
Posted by Unknown at 11:11 PM