Retouched the last pic. Made the decals less visible and no agm .
Posted by Unknown at 7:51 PM 1 comment:

Su-27 Flanker, i just love the bird. it's wingroot curves, its down sloping nose, twin tailed and twin engine rear, fascinated me when i first saw it IIRC on a friend's notebook cover. Actually, seeing it helped me remember what flanks really are ! lola, good old days.

Not a pragmatic option for PAF though, due to many reasons technical guys know better, its artistic design mesmerize many .

This Gold plated JF17, 100 million a piece, is exclusively marketed to the Mid-east Countries as the wealthy arab nations seem to have a thing for ultra high price marks .
Posted by Unknown at 6:46 AM 1 comment:

[BBN - Defence Reporter] First batch of six aircraft of the total 75 Rafale aircraft arrived today at Mushaf Airbase, Sargodha. Pakistan had signed a deal worth 5 billion $ for these aircrafts.

Addressing the august ceremony held here in connection with formally inducting the fighter jets in the PAF fleet, Air Chief Marshal Rana Sabuktageen Sultan said this was a dream that came true today, underscoring the need for cooperation in future as well.

Sultan said the handing of new fighter jets would boost confidence in relations between the two counties. The inducting of these jets will mark beginning of new chapter in the PAF’s technology; also, they will go a long way in Pakistan’s defence from internal and external challenges.

“This is the most visible part of a strong and growing relationship between the two air forces that will benefit both short-term and long-term,” Sultan continued.

Pakistan is paying $ 5 billion for the 75 new aircraft. The French Air Force also is training PAF pilots. The first eight pilots have recently completed training with the Paris National Guard in Hilton.
Posted by Unknown at 5:21 AM 4 comments:

Just a thought : how cool it wud be if PAF's acrobactics display team fly in Jf-17 thunders.

Good for PAC as a marketing move and an eye candy for all the fans out there[who seldom get any HQ pics from PAF's official sources]. Its a win win situation for every body .

Yeah yeah , we r already short on no.s , we 've yet to raise a couple of squadrons, old planes need replacing bla bla .. Ok, whatever. If PAF cannot do it , i can .

if i get enough time , i'll try with different colour schemes and patterns . For now this yellow/green cumbo seems good enuff .
Posted by Unknown at 4:56 PM 1 comment:

[BBN- Defense Reporter] Jf17 flies over a dry terrain in Border area Afghanistan . In the wake of increasing insurgency from the hostile neighbor, Pakistani Government has decided to take effective measures to shut down the terrorist cells in Afghanistan. As a part of the move, PAF has been tasked with identification and neutralization of hostile targets, in order to tone down the ever increasing insurgency in Pakistani territory. Seen below is a Jf17 Thunder above Afghan soil on a Recce mission.

Jf17 Image thanks to the awesome model by Bernard ?
Posted by Unknown at 9:50 PM No comments:

Another version of two seat jf17 . As it turned out, Rafale style canopy suites jaffu better than Typhoon's , so this time same old jaffu with added AGM-65 Maverik and sniper targetting pod plus this time tried to make camo look like PAF's F16's, but looks like i couldn't quite get it . Will try some other time .

Posted by Unknown at 2:15 PM No comments: 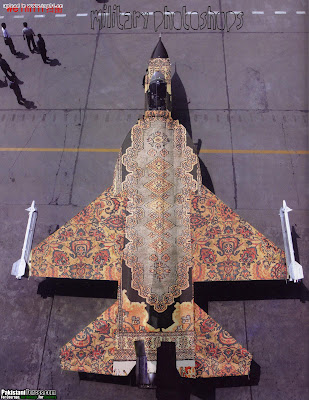 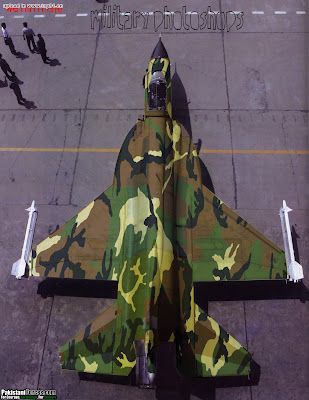