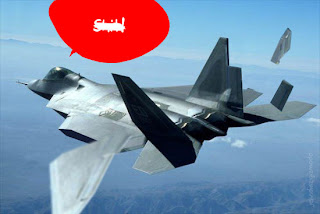 According to a just-released Air Combat Command report, 30 of the F-22A Raptors delivered by Lockheed Martin use "inadequate adhesive" in their airframes. That means two things in plain language: bad glue; and big trouble.
The report comes after investigators finished looking into an accident that happened last November. Part of the airframe of a F-22A fell off into the engine intake, causing a whopping $1.2 million of damage.
And, while we understand that machines so amazingly complex will always have flaws that need to be ironed out, let's hope they used SuperGlue with the F-35 Lightning II. Or gum. [The Dew Line]
Posted by Unknown at 7:03 AM