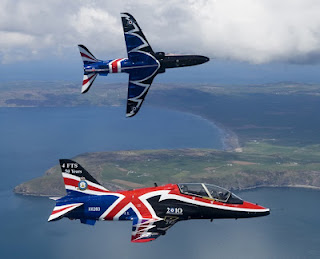 The Hawk first entered service with the RAF in 1976, both as an advanced flying-training aircraft and a weapons-training aircraft. The Hawk TMk1 version is currently used at RAF Valley for fast-jet pilot advanced flying training with No 208 Squadron, and at RAF Scampton by the RAF Aerobatic Team, the Red Arrows. The Hawk TMk1A is used for weapons and tactical training on No 19(F) Squadron at RAF Valley, and by No 100 Squadron at RAF Leeming for advanced fast-jet weapons systems officer training and operational supportflying. In its weapons and tactical training role the Hawk is used to teach air combat, air toair firing, air to ground firing and low flying techniques and operational procedures.

The Hawk is an all-metal, low-wing, tandem seat aircraft of conventional design. The wing has a
moderate sweep with 2º dihedral and trailing edge slotted flaps. A one-piece all-moving tailplane is also swept back with 10º dihedral. The fuselage comprises three main parts. The front fuselage accommodates two equipment bays and a pressurised cabin containing two tandem cockpits. The centre fuselage contains the engine, a fuselage fuel tank, a gas turbine starting system and a ram air turbine; the ram air turbine provides emergency hydraulic power should the two normal hydraulic systems fail. The rear fuselage houses the jet pipe bay and an airbrake hinged to its under surface. 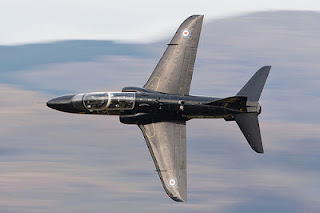 The Hawk is powered by a Rolls-Royce Turbomeca Adour Mk151 turbofan engine, which is an un-reheated version of the engine powering the Jaguar GR3 aircraft. The engine, which drives a gearbox providing power for the aircraft generator, both hydraulic pumps, an oil pump and a fuel pump, has proved to be economical in use and is ideally suited for a fast-jet training aircraft. While the Hawk TMk1 is used solely in the advanced flying-training role, the Hawk TMk1A is equipped to an operational standard and is capable of undertaking a number of war roles. The Hawk TMk1A has two under-wing pylons cleared to carry BL755 cluster bombs or Sidewinder AIM-9L air-to-air missiles, and can carry a 30mm Aden cannon in a pod underneath the fuselage centre-line. The cannon can be fired at the same time as any of the pylon-mounted weapons are selected for release or firing. Aiming facilities for the aircraft’s attack modes are provided by an integrated strike and interception system, while a Vinten video recording system is used to record the weapon sighting. 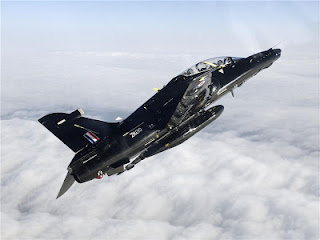 The next generation Hawk aircraft, the Hawk 128, will enter service in 2008 as a replacement for some of the current Hawk TMk1s. The Hawk 128 will introduce student pilots to the digital cockpit environment they will experience in front-line operational service and will provide a seamless transition between basic flying training on the Tucano, and operational conversion training onto advanced fighter aircraft such as the Typhoon F2 and the Joint Combat Aircraft. The Hawk next generation TMk1 version is used as a fast-jet pilot advanced flying-training aircraft. Hawk  TMk1A version is used as an air-to-air and airto ground weapons training aircraft. Can be equipped with bombs, rockets and missiles making it suitable for a war role. A strong and rugged aircraft, which has been designed to cut training and maintenance costs. Airframe refurbishment and replacement programme will extend its life into the next decade.
Posted by Unknown at 11:10 PM