The Turkish government understands what the Obama Administration does not: Acquiring the American-made F-35 fighter jet is the most effective way to claim supremacy of the skies.
Yesterday, Turkey’s Defense Industry Implementation Committee announced the purchase of two Lockheed Martin F-35s. Turkey had put its F-35 order on hold in March over concerns of technology sharing and cost. However, the recent announcement suggests that Turkey is preparing itself for the increasing challenges that its neighborhood poses. 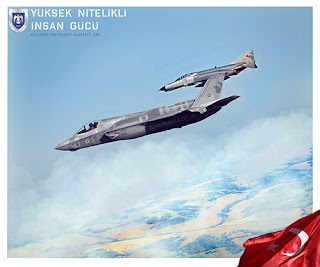 It’s unfortunate that the Obama Administration has failed to register the message. In addition to canceling production of the F-22, a stealth fighter jet built to ensure U.S. supremacy over any battlefield, the Administration has reduced production of the F-35, which American taxpayers have invested $50 billion in. As the first aircraft in history with a 360-degree view and the ability to see over 800 miles with integrated combat systems, the F-35 is a marvel of modern engineering.
In a time of austerity, critics of F-35 production argue that the jet is too expensive. Yet what they disregard is that the cost of plane decreases as production and sale of jets to allies increases. As part of the international F-35 consortium, British Defense Minister Phillip Hammond expressed concern over the cuts to the program yesterday, citing the likelihood that costs of the jet will increase if there is reduced production.
Rather than limiting production of the F-35 and cancelling its brother, the F-22, the Obama Administration should invest in the potential these jets offer to U.S. air capabilities and to our allies. Gutting the defense budget makes Americans and our allies less safe. A first step to remedying this is to take the F-22 and F-35 off the chopping block.

i only copy content for SEO to go with my picture :D
Posted by Unknown at 1:34 AM