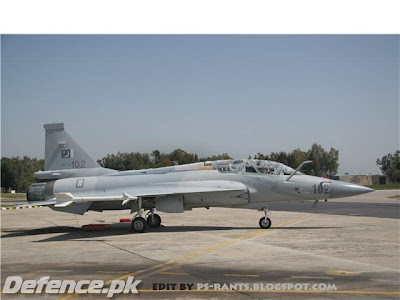 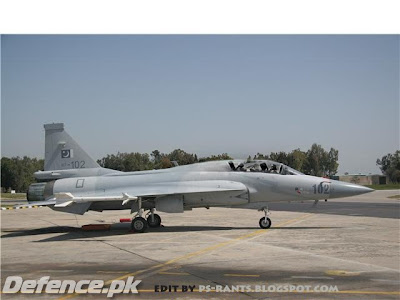 This is how Eurofighter's canopy looks on Thunder. 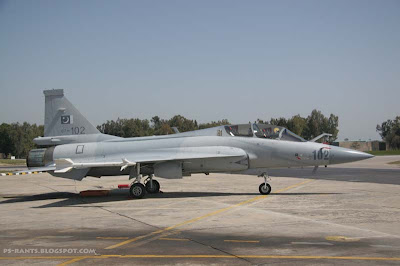 It's RAFALE's canopy sitting on our thunder .
JF-17 Thunder is the brain child of PAF. Though CAC has been carrying out its development since a long time PAF officialy became a partner in 1994, during Nawaz Sharif's Tenure. Since, then Thunder has come a long way. What was first viewed as an aluminium box capable of firing BVR missiles and a 3rd Generation fighter, Thunder has evolved into a capable 4th Gen. fighter, Much better than any thing PAF currently has to fly. It has a great potential for further upgrades. It has already incorporated advanced features like DSI - intakes ( as on F-35 ) , LERX (Leading Edge Root Extention as on F-18) . Further sought upgrades include AESA radar , IRST, two-seater version for training and attack roles and rumored V-tail stealth Design .

This particular pic is my impression about Two-seater Jf-17. Again, The real one might not be the same .

P.s. : i prefer Thunder with Rafale's canopy. That's the most beautiful combination of above all. Another reason could be that in case of Eurofighter and Mirage 2ooo, i wasnt able to find pics with suitable lighting and angle. As u can clearly notice that the brightness of the first 2 canopies dont match with rest of plane's body .

Any comments are welcome.
Posted by Unknown at 4:25 PM

Email ThisBlogThis!Share to TwitterShare to FacebookShare to Pinterest
Labels: JF17