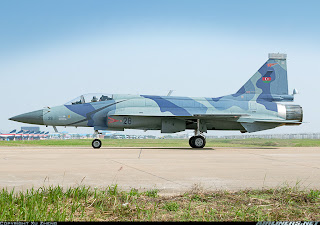 Jane's said in 2009 that 'efforts to acquire more modern hardware are understood to have been underway for several years, but funding constraints proved to be a stumbling block. Until quite recently, only limited success was achieved, with the most significant addition to the inventory being a handful of Su-25s that were obtained from Georgia in 2002. In 2007, however, Azerbaijan took delivery of the first of a substantial number of MiG-29 'Fulcrum' fighters. These are understood to have originated from disparate sources, including Belarus, Russia and Ukraine, with at least some having been overhauled at Odessa in Ukraine prior to delivery.[9]

The United States is the most active participant in the modernisation of Air Force airfields.[4] Airfields in Gala and the Nasosnaya Air Base near Haji Zeynalabidin settlement have been modernised with US support as part of the Azerbaijan-NATO Individual Partnership Action Plan. Special equipment were installed there to provide flight security. The starting command points, engineering control systems and engineering air force service were provided with new buildings. Negotiations over the modernisation of Kurdamir airfield are currently under way. An advanced Flight Control System has been installed at Dollyar Air Base with support from the United States.
Since September 2008, Turkey has helped to modernise the Air Force central command headquarters. According to a Turkish-Azeri agreement, a NATO standard central command management center will be installed there. A great number of projects such as joint manufacture of unmanned aircraft will be implemented with Turkey in the near future.

Egypt is currently discussing a deal with Pakistan to co-produce the JF-17 for the Egyptian Air Force.[114] The Azerbaijani Air Forces has negotiated with China for the purchase of several dozen JF-17s, worth approximately $16–$18 million each.[115][116][117] The Sudanese Air Force is also reported to be negotiating for 12 aircraft.[118] The Air Force of Zimbabwe reportedly ordered 12 JF-17 in 2004,[119] but there are no current sources that confirm payment or intent of delivery.[120][121][122] In 2008 several other countries including Bangladesh, Iran and Nigeria were identified as potential buyers.[4][123] In early 2010 it was reported that China had been in talks with around 5 to 6 countries on the JF-17, some of whom had sent air force pilots to test-fly the fighter.[124] Algeria, Argentina, Bangladesh, Myanmar, Egypt, Iran, Lebanon, Malaysia, Morocco, Nigeria, Sri Lanka and Uruguay showed interest in the fighter plane.[83][125]
However, the market for this type of aircraft is believed by some analysts to be limited.[126] As of November 2012, the JF-17 has yet to achieve any export orders; AVIC has also conducted presentations of their developing Shenyang J-31, which is intended as a cheaper alternative to the F-35.[127] Argentine officials at the 2013 Paris Air Show said that they have had multiple discussions with Chinese officials over potential co-production of the Chengdu Aircraft Corporation (CAC) FC-1/JF-17 multirole combat aircraft. The discussions are the first formal effort that could lead to the co-production of a modern Chinese fighter in Latin America. FAdeA officials said the co-produced FC-1 could be called the 'Pulqui-III', recalling FAdeA's Pulqui-II, Latin America's first swept wing jet fighter.[128]