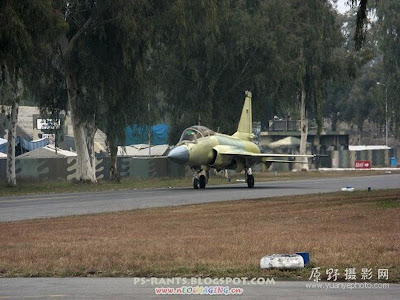 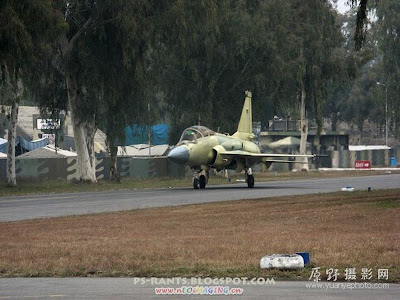 Pic. 1. shows the JF-18 prototype in its  earlier stage of development
Pic. 2. shows the final verison of the prototype with CFT's and IRST
[BBN: Defence Reporter]  An upgraded variant of JF-17. Existence is not confirmed by official Chinese or Pakistani sources but the following pics ,believed to be authentic, of a new JF-17 variant, reported to be designated JF-18 has appeared. It shows the prototype of a Twin Seat JF-17 modified with Conformal Fuel Tanks (CFT), an infra-red search and track (IRST) sensor, a redesigned canopy, a new under-chin hardpoint and an In Flight Refueling (IFR) probe.
The JF-18 is a modified variant of the JF-17 multirole fighter aircraft, with modifications in airframe and avionics. Pakistan Aeronautical Complex (PAC) began to develop a follow-on variant of its JF-17 fighter around 2008/2009. A prototype reportedly made its maiden flight in April 2009, this year. Once commissioned, the JF-18 is likely going to become the standard for later JF-17 productions.
Though remarkably similar to its predecessor JF-17, JF-18 is essentially an entirely new air craft with redesigned air frame and completely new generation of avionics.
Our constant source of inside information Officer X told us that conformal fuel tanks (CFT) to the JF-18 to increase its fuel load, permitting longer range, endurance, and flexibility in mission store loading, without compromising the JF-18’s flight envelope. These conformal fuel tanks are attached to the aircraft on the upper fuselage, from the forward strake area to aft of the wing’s trailing edge.

JF-18 is a remarkable addition in the joint fighter family and will add more muscle to PAF .
Posted by Unknown at 9:28 PM